US Olympian Cullen Jones is making a splash by teaching kids how to swim. African Americans are three times more likely to drown than any other race.

Partnered with USA Swimming Foundation, Cullen is raising dollars and awareness for drowning prevention. Jones almost drowned at the age of five.

P&G should use this footage in its Thank You Mom campaign.

I Said “Shit” In An Interview!

At least I said it with passion!

So let’s start at the beginning. It was an informal interview at Starbucks, however I was in a suit and heels with my portfolio in hand. Because, despite my outburst, I am quite conservative when it comes to my career which surprises many people who know me as a creative (and know me in my personal life).

Anyway, we hit it off and it was going quite well, more like a conversation between colleagues. We were discussing the state of education in this country and its impact on our children. Well, this is one of my key issues and I became rapt in the conversation. Then, all of a sudden it flew out of my mouth; I didn’t even realize it for a few moments! I don’t even think it hit her until I reacted. I was mortified! After apologizing profusely, redfaced, she swatted it away and made me an offer.

Someone Has to Be Responsible

The first lawsuit resulting from the Century Aurora shooting has been filed by the best friend of a victim who was shot in chest and died. The lawsuit names three plaintiffs: the theater itself for not having an alarm or guard at the emergency exit; the doctor of Holmes, the assailant; and Warner Brothers producers of Dark Knight Rises.

I do not minimize the pain of losing a friend, so violently and up close. But shouldn’t the lawsuits be left to the families of those who were injured and killed? Surely, the plaintiff could turn this experience into action: become an advocate for gun violence. In the lawsuit, he says of the producers that “someone has to be responsible” for such rampant violence. Didn’t he willingly go to see the movie?

Instead of monetary gain, I think his friend’s memory would be better honored if he were to galvanize young people in order to lobby against gun violence; and to use social media as a tool for it. Because nobody’s hunting with automatic weapons. You don’t need such a weapon to protect yourself, so NRA be damned!

Posted by joyinhome on July 25, 2012 in Health, Movies, Politics, Youth

Washington State has upped the anty. Not only can you register to vote online (available since 2008), starting next week you can register to vote via Facebook. Since 2008, 475,000 WA voters have registered and/or updated their addresses online. Okay, but with the added Facebook twist, how is it verified?

These are the best jobs for you, according to Payscale.com.

In a previous professional life, I worked with an organization that did much research and lobbying on the topic of work-life balance and related issues, so I know a bit about it. With that being said, this listing takes work-life balance into consideration, although I don’t believe there is such a thing; I have decided that as a professional you must constantly adjust and revisit your priorities.

Unfortunately, writer or PR professional did not make the cut…oh, well. FYI – dental hygienist and acupuncturist are at the top.

I said that I wouldn’t post about this anymore…

In an interview last night George Zimmerman reportedly said that it must have been part of God’s plan for him to shoot 17 year-old Trayvon Martin. He laso said that he didn’t rregret anything that he did. For him to be able to say something like that and for people to continue to defend his actions is disgusting. At the end of the day, a man shot an unarmed youth that he was told by police not to pursue. All the legal maneuverings send the message that Martin’s life is not as precious – kinda reminiscent of the 3/5 rule…

As I said before, Martin’s parents are much better people than me.

Are we still here? Women starving themselves to be pretty…isn’t that an oxymoron, juxtaposition or something? Where are my English majors? Anyway, I digress.

Model Kate Upton recently defended herself against attacks to her healthy body. She is being called a piggie among other things. I thought by now we would be back to a more healthy and representative ideal of beauty, but alas, we are not. We catch glimmers of it when there is appreciation for a JLo butt or a Beyonce face, but I can remember being 120 lbs at 17 and feeling like a cow. Soooo glad I grew up and gained confidence.

Can we please show our girls better.

I Got Five On It! 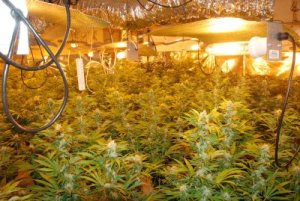 Not on this high-grade marijuana that an alleged 17 year-old kingpin was selling. This product sold for $350-$400 per ounce. The 600 plants that were seized from several warehouses are reportedly worth $3 million dollars (watch the evidence room…).

Just think what this young man could have accomplished in the (legit) business world! A multi-million dollar drug business…luckily he will catch a break in that he will be charged as a juvenile. He made the transactions at 16. Parents, heads up…

BTW – While looking for a photo, I stumbled upon all types of blogs and websites teaching about cannabis and how to grow it. WOW, seriously! Have I been under a rock?!?

Last night, my daughter and I attended Cirque du Soleil’s IMMORTAL show inspired by the genius who was Michael Jackson. It was phenomenal. And from a MJ fanatic (yeah, I said it!) that is high praise. This was my first Cirque experience, so I didn’t know what quite to expect. Because it was inspired by Michael, my expectations were ridiculously high and I did not want to be disappointed. Again, phenomenal…

I can not capture or articulate the integration of artistry, music, dance, images, video and acrobatics of the show. It was a sumptuous affair for the MJ lover and artist in me. It was a sensory experience with vibrant colors, lights, movement, music, sounds…at times, I was overwhelmed and my greedy eyes did not know where to focus my attention.

The show opened with “Michaels” of different eras: Afro and golden outfits to tight pants with buckles and zippers down the leg with wrapped arm, hands and fingers. We got a taste of the music, his music, and I was riveted to my seat. There were artistic interpretations of his songs and words as well as performances of his one-of-a-kind moves; it spanned from the Jackson 5 to This Is It. My daughter anxiously awaited the “lean” of Smooth Criminal and they did not disappoint, replete with the 30s dance club scene with Mikey “The Glove” and machine guns. I was excited to see This Place Hotel incorporated, one of my favs by MJ that many don’t know.

I was also touched to see that his care and concern for people and the earth was an integral part of the performance. Songs like Black and White, Earth Song and They Don’t Care About Us received their just due. Of course staples like Beat It, Billie Jean and Thriller were also central. Many individuals who worked with him over the years were also behind the scenes: a drummer, a musical director, a choreographer, a costume designer.

Now let’s talk about the intricate props. There was a replica of the front gates to Neverland, machinery for Dancing Machine, huge iconic replicas of his loafers and white socks as well as the glittered glove, suspended swing with a mechanized child and, wait for it…Bubbles… Yeah, Bubbles joined the party. Someone in full costume and mannerisms until a friend who saw the show, thought it was a real monkey for a while. A perfect segue to the costumes. They were sick! Some were studded with lights so that the dancers looked like constellations as they floated through the air. Others were animals, metallic robots, bats, the undead…

I don’t have a favorite scene/performance. Everything was done so well and I got a little misty a few times. Cirque du Soleil paid great homage to one of the greatest performers that will ever be and the title of the tour is an apt descriptor of his imprint. It was- dare I say it- magical. If you have the chance, go see it!

Michael would have loved it.