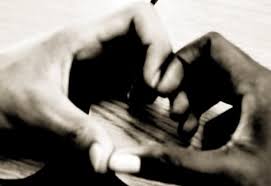 Sometimes we have to look into the mirror. And better yet search our hearts.

I have a dear friend whom I consider my sister. I admire her immensely and frequently refer to her as Superwoman (that is my ringtone for her). However, she falls shy of perfection, as do we all. Her 14 year-old son has his first crush and she is Caucasian; I should point out that he is African American. It is important to note that her son attends an elite, all-boys school that has mostly white students; the girl attends the “sister” school. And my girlfriend is upset, to put it lightly.

She called me about a week ago, asking me to talk to him about it. She assumed that I would “talk some sense into him.” This week, she called me exasperated telling me how she was stressed out and crying for the last two weeks. I was alarmed wondering what had happened.

“I already told you what was going on…”

I was stunned because alarm level was waaaay too high. Something did not add up.

Then she launches into the history of black men and white women. How they were lynched, persecuted and unfairly accused. Which is preaching to the choir because I was raised by parents who were extremely involved in the civil rights movement, Pan-Africanism, Afrocentricity, etc. In college where we met, she used to say that I was so “militant.” Fast forward.

“Has this girl made you think that she likes him because he is black? Or because he plays sports? Has she made any demeaning comments regarding race?” No…I don’t get it. I mean, I do…but, I don’t.

When she saw that I was not going to tow the line, she got upset. Her voice raised and she kept cutting me off.

“He knows better and I feel how I feel.”

I quietly listened until I felt her running out of steam.

Now. As parents, we have dreams for our children. We envision what we want their lives to be and the accomplishments we want them to make. And then, there’s reality. Our children must live their lives for themselves. I cut her off anticipating how she would react to that statement of fact; I was not finished and it was my turn. 😉 As parents, we also tend to burden our children with our mess/baggage/wounds. I don’t know what hers are exactly, but they are deep. She seems to hear me.

Then, she informs me that he has broken household rules: staying up too late, talking on the phone until midnight, being disrespectful when speaking to her. Now, those infractions warrant her disapproval. I told her to punish him for those but to be sure to delineate those actions from his choice to see the girl in question.

I told her to remember her first crush (careful to not use the word love). The overwhelming nature of it, the all-consuming urgency, the euphoric power that it held. However, many times these young “relationships” burn out quickly, but not when constantly condemned.

“His hormones are raging, defiance is high and if you keep protesting he will continue even if she has lost her luster, because you say no.” We all know how great it felt to stick it to our parents as angry teenagers full of angst!

“Perhaps you should concentrate on the fact that he’s a positive, intelligent young man. He has a good heart, loves his family and enjoys sports. The next girl could be Asian, the next one African American, then Latina…who knows…”

She starts up again about how she feels and that she knows her son and believes that he is only going to date white girls although he has not said it. “Then cross that bridge when we get to it. Because if that’s the case, there is some level of self-hatred.” But inside, I don’t believe this to be the case and I don’t think she does either.

“And then, we were talking about the situation and he said that I was prejudiced!” Weeeeeell… I could literally see her clutching her pearls. “You are prejudiced and so am I. The difference is that I recognize it and continue to work at it.” Let’s just say that did not go over well.

My son attends a bilingual school and is almost fluent in Spanish. His school is diverse with a high concentration of Latina girls. Although he is only five, he will attend this school through fifth grade. I understand that his experience is different from my own. When he starts liking girls, Latinas and maybe other races will probably be on his radar. I need to be okay about it.

Everything has not changed, but some things have. I told my friend that this generation of kids do not have the separations that even we had; the lines of music, culture, clothing, politics have been blurred. And isn’t that a good thing? Isn’t that what many of our ancestors worked, lived and died to have? Then I had to hit her with some MLK. Haven’t we taught our children that they can do what they want and be who they are? That they should be judged by the kind of person that they are? You can’t raise them that way and then hit them with exceptions later. Content of their character rather than the color of their skin, right?!?

I can not adequately express the depth of my friend’s despair. I am concerned for her, not her son. She is distraught in a way that upsets me. I told her to give it some space and “to be still.” Then, I told her I loved her and even when we disagree I love her still.