I Disagree with President Obama (this time) 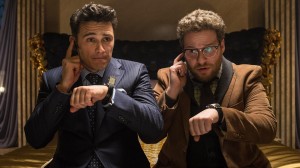 Anyone who knows me knows that I HEART Barack Obama! On so many levels, he captivates and humbles me. And I am indebted to him for the inspiration that his face alone lends to coming generations who will strive to follow in his footsteps.

With that said, I disagree with him on Sony’s decision to pull the movie, “The Interview.” I absolutely believe that it is the right thing to do; it actually should never have been made.

Last weekend, my boyfriend and I are watching NFL pre-game coverage when we see the movie’s trailer for the first time. After it goes off, we slowly turn to each other with blank expressions. “Is that a good idea?” I ask, my rhetorical question hung in the air.

Fast forward to Monday when the shit began hitting the fan. Fast forward again to Thursday when news broadcasts were reporting the outrage coming from Hollywood citing censorship and First Amendment rights. A colleague of mine and I stood and stared at the television, silent. She turns to me and I say, “Lyn, am I crazy- am I the only one who thinks this movie should be pulled? And before you answer, we ARE talking about a comedy with a plot to assassinate a country’s leader, correct?”

“Don’t you know that assassination is funny?!? No, you’re not alone…”

Let’s put aside how this country or any other feels about North Korea and/or Kim Jong-un. How is it okay to make a movie with a plot about killing a country’s leader who is volatile, to say the least? Are there no better film topics? Is this advancing social commentary? I know every film can not nor is meant to be Oscar-worthy but aren’t we crossing a line here?  No, I have not seen the movie obviously, but it never would have been on my list.

Posted by joyinhome on December 19, 2014 in Arts, Movies, Politics, violence