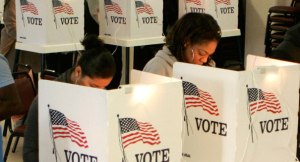 The presidential campaigns would do well to address female voters, holistically. Excuse me, but I am more than my reproductive system! Hellooooo!?!

The myriad of political ads by the President and Governor Romney that feature and/or target women only address either’s stance on reproductive freedom. Now, I understand that it is a divisive partisan issue so that must be the only reason for the ads. Never mind that a great percentage of women are head of household, we make the majority of decisions when it comes to our family’s financial matters, we comprose almost half of the workforce and are most of this country’s college graduates.

With that said, why are the ads so narrowly focused?

Obama’s 2008 campaign directly addressed the needs and concerns of women. He wooed women voters during campaign stops and debates. During this year’s debates, not so much. I think he made mention of equal pay and signing Ledbetter as his initial piece of legislation, but I want a concerted, purposeful courting.

We are almost half of the population and consistent voters. Don’t minimize our intelligence and influence! And, we made a difference in the 2008 election. I think the President, especially, missed a huge opportunity by not reminding us of what he has done during his term to positively impact women. Healthcare reforms removed pre-existing conditions which disproportionately impacted women AND forced policy changes that charged us higher premiums; equal pay legislation was passed to put employers on notice to not pay women less and offer legal remedy; Pell grant funding that assists more students to attend college; Tax credit provisions for working families; creating the White House Council on Women and Girls. Toot your horn man!

Don’t misunderstand, I know which candidate will better serve my needs as a woman and American citizen. However, never take the female vote for granted. But what do I know…I am but a lowly 47 percenter…