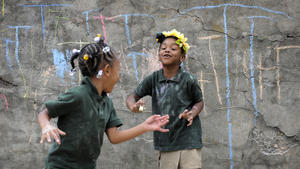 Andrea McDaniels at The Baltimore Sun wrote an article that I had to thank her for writing! It is one in a series but I just stumbled upon this installment via my Twitter feed this morning. And I am sharing it with as many as I can…

I was a 20 year-old college student when I lost the man that I planned to marry, Frederick Walker aka “Bula.” He was also a college student, studying Electrical Engineering. Bula was shot multiple times by his best friend’s nephew who was 15 at the time.

This all happened three weeks before my junior year in college. Instead of going back to school, I sat out for a semester. I found out that I was in the early stages of pregnancy but miscarried with the grief.

The only reason I returned to school was because he would never be able to earn his degree so I could at least earn mine. IT WAS THE HARDEST THING THAT I’VE EVER DONE. Burying him, then getting my head together to finish school. I was functional but crazy and I don’t say that lightly. Somehow I did it. My college friends rallied around me and my writing helped.

But graduation brought a new wave of hurt. My graduation gift from him was to be an engagement ring. He asked me to marry him, but could not yet afford the ring. We had picked it one out together and he promised to give it to me at my graduation. He was working several jobs while in school and we were so excited for a life that we would never share. I graduated and returned home to him being gone.

I used to tell anyone who would listen that the field psychiatry needed to study this issue of family grief resulting from homicide. I knew that the intensity of such loss could impact the health and well-being of people; and because African Americans were disproportionately suffering from this pain, I knew it was changing our community. People who loved me chalked my theories up to grief.

I can identify with people who were interviewed from the article who said that people judge the loved ones who were killed. As an African-American woman who was very young at the time, people assumed that he must have been a drug dealer or somehow on the wrong side of the law or doing something that earned him those bullets. (And even when that is the case that doesn’t lessen the pain felt by those who love them dearly!) But it was quite the contrary; he remains one of the best people that I have ever known! He had been helping the 15 year-old get his life together. The young man got into some mess and my fiancee found out. He was angry with him and they began to argue. Reportedly, the young man became afraid (although Bula was unarmed) and shot him repeatedly in the chest and torso.

Although I did not receive any counseling, I have learned to carry him in my heart and to release most of the anger. But losing him in that manner changed me in ways that I probably have yet to realize – people can not begin to imagine. I still plan to seek professional help because I think it can still be valuable and, as an adult, I am unafraid to do so. I am so thankful that research is beginning to address the “ripple” effect because we live in a violent world that doesn’t seem to be getting better.

← Manspread
The Dynamic Definition of Family →