Last weekend my daughter and I scored some much-needed alone time. Surprisingly, rather than retreat to her room, she suggested that we pop some popcorn and watch movies. You can’t imagine my joy.

She quickly selected The Boy With the Striped Pajamas, having recently read a book penned during the Holocaust. Her class watched a portion of the movie at school and discussed many of the issues involved.

Meanwhile in history class, they were studying human rights violations across the globe, from Cambodia to Rwanda to the USA. We had some discussion about Jim Crow, Tiananman Square, Kent State and Tutsi vs Hutu. It is exhausting and sorrowful to explain the inexplicable to your child- to describe the depravity of man.

Up watching late-night tv, I noticed The Boy In The Striped Pajamas in the guide and recorded it. There were a few times during the movie when she would look at me with a blank look. She later explained to me that her teacher said that the character of the Jewish boy was for dramatic effect because children that young were put in the crematorium.

Of course we talked a lot afterward; I had to make sure she was okay (and me too). She wanted to watch Hotel Rwanda next but I told her we should save it for another night. 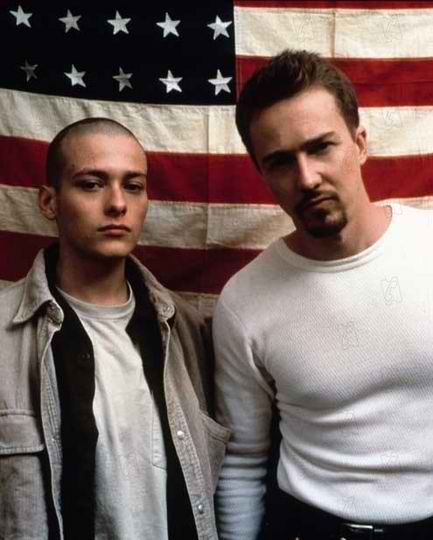 As we flipped for something else, I came across American History X. I sighed and she wanted to know what it was about. After I explained what skinheads were, she wanted to watch. After a while, she said, “I thought you needed a break.” I did, but couldn’t let her watch that alone. I told her at least in this one, you had someone who was seeking redemption and wanted to change. We didn’t finish the movie and Hotel Rowanda is still on hold.

My mom asked why they were reading such books at school. I told her it’s history; they need to learn and try to understand the background of the world. She grunted.